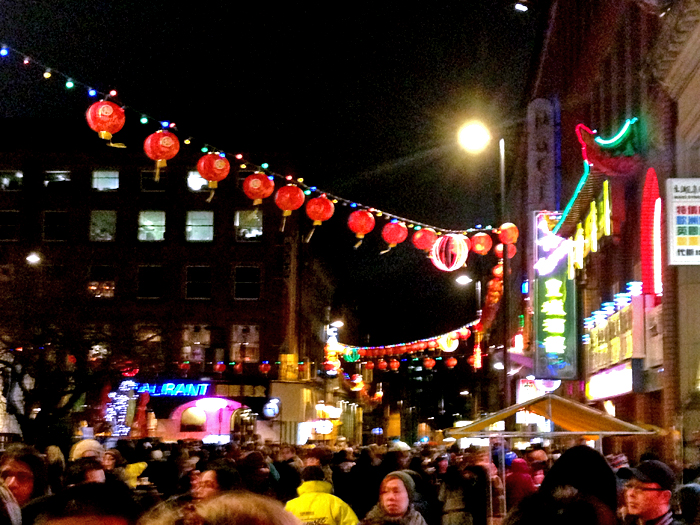 Picking up where I left off last post, I spent the Sunday after ringing in the Year of the Snake with a trip to Manchester. For someone who had never previously been to a Chinese New Year celebration, I would say I’ve done pretty well this year, tallying one festivity, and doubling that number the next day.

I’ve realized since that the trains are a short 15-minute walk from my place. After a quick 40-minute scenic tour of grassy hills, covered in sheep and black spidery trees, I was in a real city.

I fell in love with Manchester the moment our train entered Victoria Station. Half of the buildings in the city are historic, weathered with age, and architecturally beautiful. The other half are modern, avant-garde compared to Vancouver standards. It’s almost like being in a miniature display one might find in a museum: The contrast inherent to the city is itself a form of art.

Had it not been a miserably cold and wet day, I would have brought along my camera. Unfortunately, I’m still in that new-purchase phase, where I’m extra cautiously trying to avoid subjecting my camera to the tiniest scratch or speck of dirt.

But there’s no doubt I’ll be going back.

I took the trip with two new friends who are studying at UCLan for the year, both of whom are from Spain. One had to take photos of the city’s Chinese New Year festivities for a class, so off to Chinatown we went.

We saw dragons, we heard music, we braved the crowds and the rain and eventually took a break to warm up in an English pub. I had the classic fish and chips, which came with the typically British “mushy peas” that, although looking like baby food, tasted not too bad.

After wandering around a bit more, we chatted about the differences between Spain and Canada, about education, and stereotypes, over coffees and cakes until it was time for the fireworks. It was a perfect end to the weekend.

The next day – back to reality. Well, my reality: A class I enjoy that starts at two in the afternoon, and a random eco-friendly rickshaw ride to get me there. Carpe diem.