So the Quebec government has proposed restricting all public employees from wearing visible religious symbols. It’s to create an inclusive society, says Premier Pauline Marois. To liberate women from subservience. To keep a neutral face on the public, she says.

A neutral face on society is Orwellian rhetoric – and it’s scary. What is “neutral”? Is it to appear atheist and secular? In which case, this neutral face isn’t exactly neutral anymore. When it comes to religion and science and disbelief in either of those, there is no default, because they all offer a different answer to the same question. The default for all of mankind isn’t atheism, nor is it the Big Bang or Christianity or Islam. The problem in thinking that secularism equates “neutrality” is that for those who live lives led by religion, excluding religion from certain parts of their lives is sacrilegious. It’s okay to think that your way of seeing the universe is the way, but no one should impose that on anybody else. Especially not a state.

Are we not a multicultural society? Is Quebec not part of this great Canadian mosaic that forms the basis of our country’s confused identity? Nobody is “neutral.” I’m a woman, and I like to think that I look like one. I’m caucasian, and my tan isn’t significant enough to persuade otherwise. Nothing is over, but here in Canada we like to claim we sorted out our issues with racial discrimination ages ago, and that today, we’ve made progress in gender equality. Why do we get so squeamish when it comes to dealing with religion?

Not being of any religious affiliation myself, I can’t speak for the more devout. But from my understanding, your religion isn’t just a hat you put on when in your private home – or at your church, mosque, synagogue, temple – only to take off when in public. Sure, assuming free will, it is a choice to be religious, just like it is a choice to uphold the values of your chosen religion. But let’s not forget that religion isn’t just a source of personal identity: It’s a belief about the world that encompasses all of the people in it and all of their actions; how we came to be, where we’re meant to go. It permeates not just one aspect of a believer’s life, but all of them. Religion is a way of life, and not being allowed to practice your way of life in public contradicts the point of religion. This applies across the spectrum, from lying to eating certain foods to wearing religious garb: If you act one way half of the time, and another the other half, are you really a believer? And it’s a totally different situation when you aren’t allowed to choose how closely you choose to follow your religion of choice. Such a mandate, like Quebec’s proposed charter of values, is doubly controversial: It impedes practicing your religion and it removes the personal choice of how you practice your religion.

It is a constitutional right to have freedom of religion, as well as freedom of expression. We also have the right to not be discriminated against based on race, gender and religious beliefs. I don’t think we have the constitutional right to all public services – I am not entitled to services for people with disabilities, and I don’t claim entitlement or argue for it with some distorted idea of all-for-one and one-for-all equality. We are all legally entitled to certain things, but that’s entirely different from being constitutionally guaranteed certain rights and privileges. This would mean that if someone feels uncomfortable because they’re seeking a public service from someone wearing a religious symbol, their claim to “not have to feel uncomfortable” gets pitted against the rights of someone expressing their constitutional freedom of religion. Wouldn’t the onus be on the person feeling uncomfortable to just go elsewhere? The concept of “entitlement” versus “fundamental rights” is complex, tricky and all but clear.

I get inclusivity, I also get fairness. And I think that people feeling weird about religion should not have a whole system that protects inclusivity brought down to their narrow-minded standards.

Speaking of fairness, I was going to say that the only “fair” thing about this unfair proposal is that it would apply to all religions equally. That was before I saw this poster. 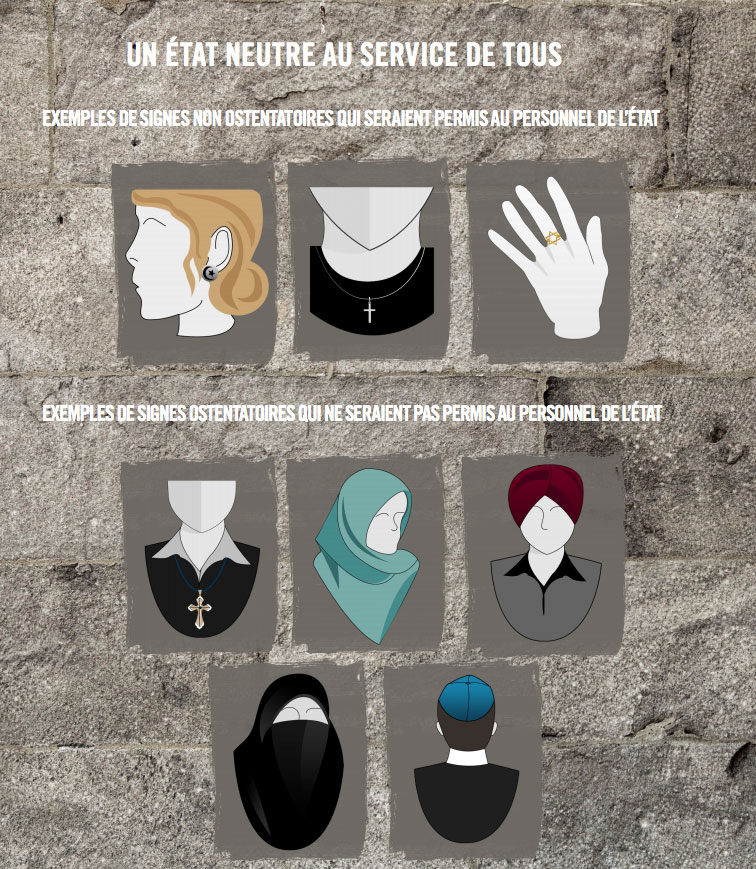 The first three images show what “non-ostentatious” symbols would be allowed in public under the proposal; the five underneath them are examples of what will be banned.

There has been a lot of backlash to the proposal – from the federal government to local business leaders to those partaking in Montreal protests. Some people have it wrong, others have it right. A quote from Calgary Mayor Naheed Nenshi, in the Globe and Mail: “It is important for people across Canada, and particularly in Quebec, to know that if they don’t feel welcome in that community, they’re certainly welcome in this one.”